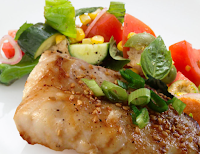 My secret weapon is "Seared Flounder & Summer Panzanella with toasted sesame seeds, Corn, Shishito Peppers and Thai Basil". This traditional Tuscan salad combines corn, plum tomatoes and an heirloom cucumber, as well as two specialty ingredients: shishito peppers and Thai basil. Shishitos are sweet and generally mild, but about one in every ten is hot (so be careful)! Thai basil is a cooling, anise-like variety of the herb that perfectly completes the salad. Served alongside seared garlic flounder fillets is delicious.

Pat the flounder dry with paper towels; season with salt and pepper on both sides.

Divide the cooked flounder and panzanella between 4 plates, sprinkle toasted sesame seeds on top and serve.