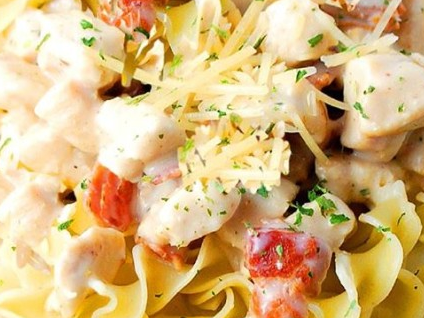 This Crock Pot Bacon Ranch Chicken is sure to please  everyone at the dinner table.

Pour over chicken in the crock pot.

The best ever Open Faced Turkey Sandwiches starts with a crock pot!

Cover and cook on low heat setting 8 to 10 hours.

About 10 minutes before serving, cook mashed potatoes as directed on package.

Remove turkey from crock pot and shred with two forks.

Stir poultry seasoning and Worcestershire sauce into gravy in cooker.

Place large spoonful of turkey on each toast slice. 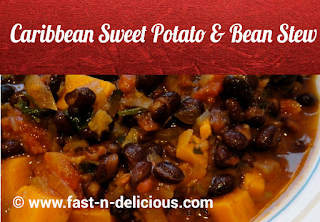 This "Caribbean Sweet Potato & Bean Stew" is a vitamin packed stew that combines sweet and spicy flavors for an extraordinary taste.

Bake 8 to 10 minutes or until golden brown, stirring frequently.
Season to taste with sea salt and pepper.

"Delicious Lemon Pepper Cod" with stir-fry vegetables is absolutely the best crock pot meal!! It is full of flavor, this is why it's a great option for an crock pot inspired meal.

Line bottom of the crock pot with the sliced yellow onion.
In a bowl combine lemon juice, black pepper, sea salt, rosemary and parsley, mix well then rub on both sides of the cod.
Layer cod on top of the sliced onion.
Season with salt, lemon-pepper and rosemary.
Pour tomatoes over everything.
Cook on low heat for 2 to 3 hours or until fish flakes and vegetables are tender.
Pasta
In a small skillet melt butter add basil and garlic cook for 2-3 minutes.
Remove from heat.
Drain pasta or rice (do not rinse pasta) and pour into a large bowl.
Pour butter mixture over the pasta and mix well.
Plating
Plate pasta or rice in center of the plate and top with cod.

Sprinkle with grated Parmesan cheese and top with fresh parsley. 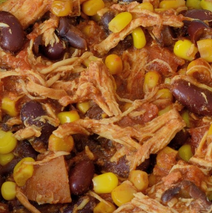 Cook on low for 6-8 hours or high for 4 hours.
With 30 minutes of cook time remaining remove the lid and shred the chicken using two forks.
Add the beans and corn to the slow cooker and mix together with the chicken. 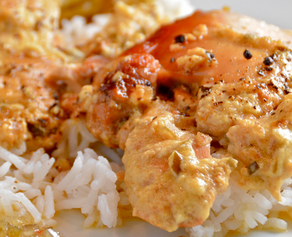 This easy and awesome Slow Cooker Picnic Chicken will add a touch of home to any picnic.

Rinse chicken well; pat dry. Place in a greased 5-6 quart crock pot skin side up.
In a mixing bowl, stir together the relish, mustard, and mayonnaise. When well blended, stir in the chicken broth. Mix well.
Pour sauce over the chicken.
Cover and cook on low for 6-7 hours, or until chicken is tender, but not dry or mushy. 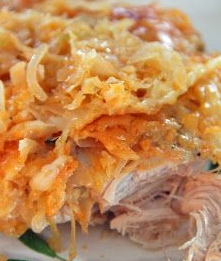 Use your slow cooker to make this delicious and simple Ruben Chicken Casserole for something different for dinner tonight.

Layer half the sauerkraut in the bottom of a greased 5-6 quart crock pot. Drizzle with ⅓ cup of dressing.
Place 2 to 3 chicken breasts on top and spread half the mustard over the chicken.
Top with the remaining sauerkraut and chicken breasts; drizzle another ⅓ cup of dressing over all and reserve the remaining dressing for serving.
Cover and cook on low for 4 hours, or until chicken is cooked through and tender.
To serve, place each breast on a plate. Divide the sauerkraut over top the chicken. Top each with a slice of Swiss cheese and a drizzle of the remaining dressing.

Wow company with this savory dinner that can cook all day while you ran errands or work!

Heat 1 tablespoon oil in a large skillet over medium-high heat until just smoking.

Add half of chicken, skin side down, and brown lightly; transfer to plate.

Cover and cook over medium heat until mushrooms are softened.

Uncover and continue to cook until mushrooms are dry and browned.
Stir in garlic and cook until fragrant, about 30 seconds.

Slowly whisk in wine, scraping up any browned bits and smoothing out any lumps; transfer to slow cooker.
Stir broth, carrots, soy sauce, and bay leaves into slow cooker.

Nestle browned chicken with any accumulated juice into slow cooker.

Cover and cook until chicken is tender, 4 to 6 hours on low.
Transfer chicken and vegetables to serving platter and tent loosely with aluminum foil.

Stir in cream and tarragon and season with salt and pepper to taste.

Spoon 1 cup sauce over chicken and serve with remaining sauce. 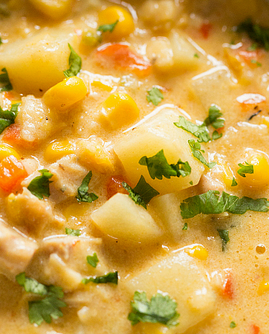 A creamy combination of delicious corn chowder with chicken and colorful vegetables makes this a hearty meal that’s easy to prepare.

Stir in 1 tablespoon oil and onions and cook until softened.

Stir in garlic, tomato paste, and thyme and cook until fragrant.

Season chicken with salt and pepper and nestle into crock pot.

Cover and cook until chicken is tender, 4 to 6 hours on low.
Transfer chicken to cutting board, let cool slightly, then shred into bite-size pieces.

Stir in basil, season with sea salt and pepper to taste, and serve.

This Louisiana favorite "Chicken and Sausage Gumbo" is made easier by utilizing your crock pot but it taste just like traditional gumbo.

Directions
Heat the oil in a large Dutch oven over medium heat until simmering.

Gradually stir in the flour with a wooden spoon, working out any small lumps.

Cook, stirring constantly, reaching into the corners of the pan, until the mixture has a toasty aroma and is deep reddish brown; about 20 minutes.

The roux will thin as it cooks; if it begins to smoke, remove it from the heat and stir constantly to cool slightly.
Stir in the onions, bell peppers, celery, garlic, thyme, sea salt, and cayenne and cook, stirring often, until the vegetables soften, 10 to 12 minutes.

Let the cooking liquid settle for 5 minutes, then gently tilt the slow cooker and remove as much fat as possible from the surface using a large spoon.

Remove the bay leaves and stir in the shredded chicken, scallions, and parsley.

Refrigerate overnight, reheat in the morning and add to your crock pot.

Cook 45 minutes or until boiling hot.

Season with sea salt and pepper to taste before serving.

"Italian Vegetable Stew" is an excellent and easy to make. A delicious way to get kids to eat their veggies.

Directions
Heat 2 tablespoons oil in a large skillet over medium-high heat until shimmering.

Brown eggplant lightly on all sides, 5 to 7 minutes; transfer to crock pot.

Add 2 tablespoons oil in skillet over medium-high heat until shimmering.

Add vegetables (except corn, zucchini and potatoes) and herbs and cook until they are beginning to brown.

Pour in 1 cup broth and stir; scraping up any browned bits; transfer to slow cooker.
Add the rest of the broth, potatoes and corn into slow cooker.

Cover and cook until vegetables are tender, 4 to 6 hours on low.
Stir in zucchini, cover, and cook on high until tender, 20 to 30 minutes. 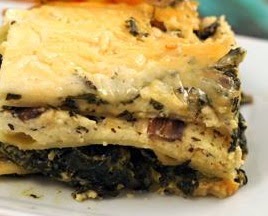 Spinach and fresh mushrooms fill this meat-free lasagna. Cottage cheese and ricotta cheese add a rich and creamy texture... Delicious! This is extremely rich lasagna. It offers a suitable way to get a dose of spinach and mushrooms. All the flavors melt together as they bake with a blend of cheeses.

Drain noodles, rinse under cold water until cook, then spread out in single layer over clean kitchen towels and let dry. (Do not use paper towels; they will stick to noodles.)

Heat oil in pot over medium-high heat until shimmering.

Stir in spinach and Alfredo sauce, scraping up any browned bits, and season with sea salt and pepper to taste.

Cover and cook until lasagna is heated through, about 4 hours on low. 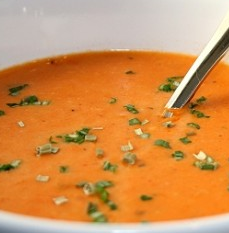 Cold weather always calls for comfort food and there is nothing more comforting than a warm bowl of the best "Creamy Tomato and Garlic Soup". The soup is so creamy and full of body that it is a great option for a meal.

During the last 2 minutes add the garlic while stirring.

In a sauce pan add the tomatoes, onions, garlic, tomato sauce, sugar, and Swanson Vegetable Broth, cloves, sea salt, and pepper and bring to a boil.

Reduce heat and simmer for 30 minutes.

Turn off and puree the soup in a food processor or blender.
Then pour through a strainer into your crock-pot and cook with medium 4 -8 hours.
Stir in the half-and-half.
Remove from heat and serve.